Vienna – Student accommodation, hostels and coworking spaces in Vienna (Austria). Maps of Vienna, photos and reviews for each place in Vienna.

Great places for backpackers and digital nomads in Vienna (Austria) A&O Wien Stadthalle Hostel
Great place and kind staff
The place is really close to a tram station which make it easy to arrive and go visiting. Corridors and bedrooms are clean and the price is pretty cheap. I was just a bit disapointed by the price of the breakfast that is quite expensive (7€).
Tiphaine
Fantastic 9.0 A&O Wien Hauptbahnhof Hostel
Highly recommended. I will come back for sure
For the price we paid, it was very worth it, because more than a hostel, as in our room we were only three of us, it looked like a hotel. Very clean, with separate shower and bath and inside each room. The only bad thing was the location, which while it was next to the train station and the fast food restaurants in it, was a bit far from the city center (20-30 minutes walk to Karlsplatz or 3 stops of subway). Anyway, highly recommended, when I return to Vienna I already know where to go.
Miguel
Fantastic 9.7 What’s that outside your dorm window? Chances are it’s a palace. It can feel like there's one on every street of Vienna. Once the cultural centre of Europe under the Habsburgs, Austria's capital boasts an embarrassment of architectural riches, with recent centuries seeing the addition of everything from art nouveau classics to elegant coffee houses. Backpackers love it for its walkable centre, its undercurrents of experimental art and electronic music, and – of course – its great range of cheap hostels. While there isn’t quite a youth hostel on every street, there are still loads to choose from. Choose a city-centre hostel to explore the famous Innere Stadt, anchored by towering St Stephen’s Cathedral; or a downtown hostel to enjoy the elegant Leopoldstadt, bordered by the Danube and Danube Canal. It remains one of Europe's most vibrant cities, celebrating its cultural past while embracing a cutting-edge present; a potent mix for any curious hosteller.

Vienna doesn’t do things by halves. Its parks are as ornate and pleasant as you could wish for. Get yourself out of the hostel and explore a few - try the Volksgarten for roses, the Stadtpark for monuments and the Burggarten for a stunning art nouveau greenhouse.

Viennese graves are almost as ornate as its palaces. Obelisks, statues and mausoleums decorate the Central and St Marx cemeteries, as well as housing memorials for its celebrated composers and writers.

Most museums in Vienna will drain your bank balance before you can say kunsthistoriches. So if you’re a backpacker, you’re better off at MUSA, a swanky modern art gallery that’s completely free. Check other museum websites for discount days.

More than just a palace, the Hofburg is a complex of stunning buildings that houses the Imperial Apartments, museums, a library, a concert hall and even an indoor riding school.

Lying in the extensive grounds of the Hofburg, this is the home of the Imperial art collection, including the largest number of Bruegel paintings in the world. A masterpiece round every corner.

It's a short journey out of town, and is likely to be crowded once you are there, but the Habsburg's summer residence is so extravagant it’s impossible to miss. 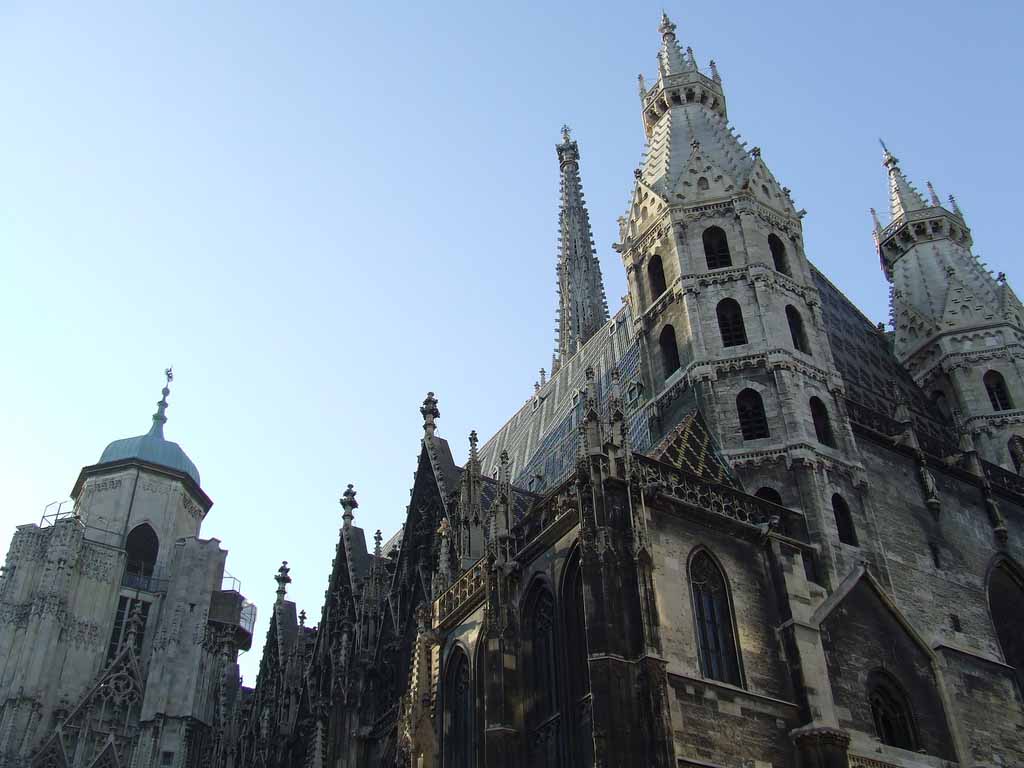 Once you’ve checked into your hostel, head here to start getting your bearings. Vienna's iconic cathedral is slap bang in the heart of the city. It was destroyed in World War II and rebuilt in just seven years, making one of Europe's most remarkable houses of worship even more incredible.

If the opulence of Imperial Austria gets a bit much, try the wavy lines and bold colours of Friedensreich Hundertwasser's idiosyncratic gallery, a gathering point for artistic types with a more modern sensibility. Expect to bump into some fellow backpackers.

A.K.A. The Famous Bit. Grandeur abounds in the historic centre of the city, where pedestrianised streets lead tourists and backpackers past cathedrals, opera houses and, of course, palaces. It's possible to spend an entire trip in this district alone.

Escape from the city centre to the vineyard-covered hills of Döbling in the North West, where wine taverns known as heurige line the idyllic village streets. Pick quieter Nussdorf over tourist-crowded Grinzing. A magical break from dorm life.

Attempting to rival neighbouring Innere Stadt for opulence, Vienna's 3rd District is similarly packed with astonishing architecture. It's here you'll find the Belvedere and Schwarzenberg Palaces, as well as the serene Stadtpark. There are some good cheap hostels just to the west in Favoriten.

Vienna, the city that invented the waltz, holds hundreds of balls each year. Save up some money, don your tux or gown, and celebrate new year in the classiest way possible.

Cinema Under the Stars (June)

Held in the open air on Karlsplatz in June, this free film festival shows a mixture of Austrian and Hollywood films, made special by its location beneath the dramatic Church of St Charles.

Running 26 miles isn't everyone's cup of tea, but there aren't many prettier places in the world to do it than Vienna, which is probably why this one is so popular. Even if you aren’t competing, the atmosphere is fantastic.

Ostentatious in a totally different way - and, okay, a little more backpacker-friendly - is the city's Life Ball in May, a celeb-filled AIDS charity event that seeks to break down taboos with exuberant partying. Make sure your costume is colourful.

Despite the cold, Christmas is one of the very best times to be in a Vienna hostel. Smells of cinnamon and mulled wine waft throughout the city as various festive markets pop up throughout its many squares. Find them at Schönbrunn and Belvedere Palaces, Karlsplatz, Spittelberg and many others.

In a city of such rich culture, it's only fitting that its annual festival should be an extravaganza of dance, drama and music. Running between May and June, it opens with a free outdoor concert at Schönbrunn Palace.

It's not all about Strauss and Mozart – Vienna goes jazzy for two weeks in July with some of the scene's biggest stars performing in some of the city's most spectacular venues.

Held on the island that stretches along the Danube, this free open air fest attracts three million visitors every June, and with good reason: there's music for everyone and the atmosphere is electric. Book early, as youth hostels will get busy.

Stretching for almost a mile over the Wien river, the 120 market stands of the ever popular Naschmarkt sell food from all around the world. With so much to choose from, it's a dream for bargain hunters and foodie backpackers alike.

A trip to Vienna is incomplete without stopping at one of their legendary cafés. Café Central is giant and tourist-filled, Café Sacher makes good sachertorte, but Cafe Eiles is a favourite spot for a late breakfast.

As Austrian as leprechauns or Guinness - so okay, not very - this Irish pub serves incredibly cheap food and beer to a backpacker-friendly international crowd. The real charm is its library atmosphere, with borrowable books lining the walls so you can read while you drink.

Lunch for under €6 – a fusion of oriental and Austrian cuisine – and a location near the medical school make this restaurant a hit with students. It’s close to some of the cheap hostels around Josefstadt, and there’s an events room downstairs where you can catch local musicians.

This place ticks every box. It’s close to hostels in Alsergrund and Rossau, and it’s as cheap as you want it to be – for any food on the menu, you pay what you feel. The Pakistani buffet doesn't have the widest selection but it tastes good and it’s sure to fill you up.

Although it welcomes all, Grelle Forelle's limited opening times, photography ban and the quirky way of finding it – follow the <>< fish signs – have given this diverse, ethical underground club a feeling of edgy exclusivity.

Every night sees a different genre of music blasting out of Flex's world-beating sound system which, when combined with a constant stream of big name acts, draws music lovers from around the world through its doors.

With three different atmospheres to choose from – thumping dance music, small concert café and slick bar area – this is one of the city's best social spots for youngsters. You’re bound to meet some fellow backpackers.

If your hostel group wants a night of serious clubbing, this is the place. Thick concrete walls mean that Fluc's prestigious visiting DJs are allowed to pump up the volume as much as they like for long, hard nights of partying. Which they do, gleefully.

Bringing the traditional wine tavern into the modern world – or at least the 1980s – this bar blends retro vibes with quality wines; a fresh twist on the Vienna drinking staple.

Two floors stacked with Viennese delicacies and delights. If you’re in a hostel with a kitchen and fancy trying out some Austrian dishes, or just fancy an edible souvenir, this is the place to visit. You can sample their wares at the café.

Head out of the hostel dorm and lose yourself in this treasure-trove of curios, selling everything from old postcards to disused advertising signs. The market is open every Sunday and alternates locations between the Ringstrassen Galerien and the Ekazent Hietzing.

Head out of the hostel dorm and lose yourself in this treasure-trove of curios, selling everything from old postcards to disused advertising signs. The market is open every Sunday and alternates locations between the Ringstrassen Galerien and the Ekazent Hietzing.

Did you know Lomography – the lo-fi photography movement built around a cheap Russian camera – started in Austria? Pick up a huge range of kit and accessories at this flagship store, plus work from Austrian artists and designers.

Get a Vienna Card

Offering free travel on any public transport and discounts in the majority of galleries, museums and buildings, this is essential for anyone fitting in multiple attractions in a short time. €18.90 for 48hrs or €21.90 for 72hrs.

Vienna's ornate City Hall, known as the Rathaus, offers free guided tours every Monday, Wednesday and Friday at 1pm. A perfect way to explore one of the city's most eye-catching buildings.

Get up, stand up

You’ll have to queue up for them, but standing tickets for the Vienna State Opera cost as little as €3 on the day. Yes, it means tired legs – but at least you’ll be ahead of the game for the standing ovation.

Vienna International airport has good links to the rest of Austria and many European cities. A direct train connection to the central Wien-Mitte station will whisk you to the city centre hostels in just 16 minutes. There are also regular bus services operated by Vienna AirportLines and Eurolines.

There are two main international stations in Vienna: Westbanhof, for northern and western Europe, as well as other parts of Austria, and Südbanhof for Italy, southern Austria and Eastern Europe.

Buses are constantly on the move in and out of Vienna, from all round Austria and the rest of Europe. Backpackers arriving by bus will alight at Vienna International Busterminal (VIB), 10 minutes from the city centre. It is beside Erdberg underground station (U3 line).

Vienna has an extensive and efficient public transport system including trams, buses and underground lines. Tickets (€2.20 for a single, valid on any vehicle) can be bought at any underground station, as well as at tobacconists or on board (for an extra 10 cents). Tickets have to be validated, either in the machines outside stations, or on the bus or tram.

Dialing codes: +43 for Austria, 1 for Vienna

Typical opening hours: 9am to 7pm

Emergency numbers: Dial 122 for fire services, 133 for police and 144 for ambulance services.